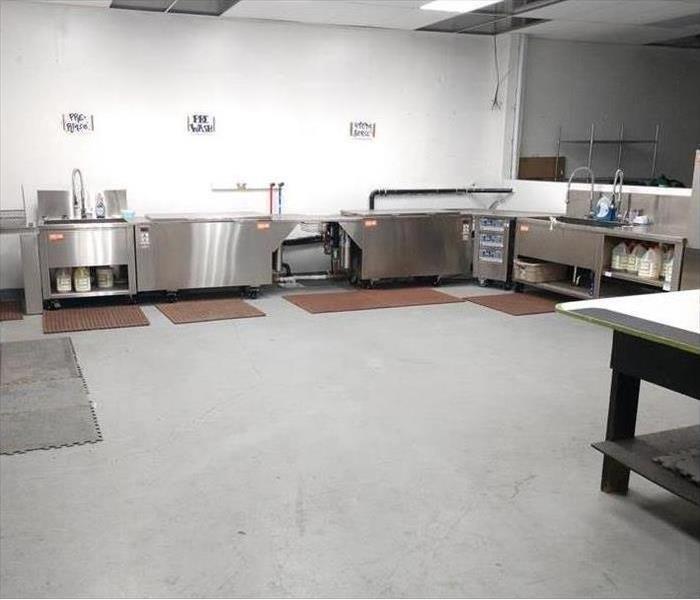 Our fire content cleaning stations are located right inside our facility. We have the technology and staff to properly mitigate contents in house.

Fire damage can transform a place with the best ambiance to feel like a dump in a matter of minutes. An unattended hair curling iron ignited a small fire in a Des Moines salon, which was aggravated by the highly combustible styling and hygiene products next to the iron. Although contained early, the fire left most areas covered in smoke residues and charred contents.

When the owner called SERVPRO to help restore the commercial fire damage loss in Des Moines, the biggest worry was whether the salon would regain its preloss state by merely cleaning it since other restoration solutions such as replacing materials would be too costly. Our crew chief took the time to explain various cleaning approaches that we could use to handle different challenges.

The main areas of concern were the oily smoke residues on wall panels, which would require considerable effort to clean and the ceiling tiles, which could be damaged by wet cleaning. Our SERVPRO technicians used their advanced training in fire and smoke restoration techniques to handle such challenges safely. After inspecting the site, we realized that we could clean the ceiling using a specialized technique called peroxide-active cleaning, which removes residues from ceiling tiles without damaging them as regular wet cleaning would. For the wall surfaces, chemical sponges helped remove fire damage residues without leaving smudges or damaging the wall panels through moisture exposure.

Away from the construction materials, charring was visible on some of the furniture while residues had deeply stained the granite countertop. For a business that deals with looks, options like heavy abrasion that would mess with the finish or leaving stains in place were not acceptable. The owner was also not eager to foot a replacement bill. Our SERVPRO technicians found a better solution by using a soda blaster, which helped remove the residue stains and charring without damaging the surfaces.

Fire causes a wide range of damages. Call SERVPRO of Federal Way at (253) 838-899 to help find a solution that deals with any issue, "Like it never even happened."